While playing any type of game, you will come across thousands of different players. If you play Call of Duty, you will undoubtedly find a player who takes everything seriously and plays by the rules. Likewise, you might find a player who acts more malevolently, trying to skew the game results in their favor by underhanded methods.

Who are these gamers? What determines their way of thinking and approach to playing the game?

Bartle’s Taxonomy of Player Types comes in and attempts to categorize it for our puny human brains to better understand. 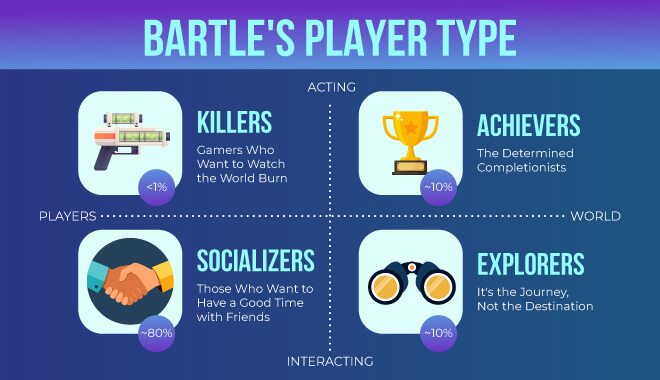 What is the Bartle Test of Gamer Psychology?

While it sounds rather fancy, the Bartle test is quite a simple signifier of what type of psychology a specific player exhibits while playing a single-player or multiplayer game. Categorizing players and their different playstyles gives you a better idea of who is playing your game, and what kind of psychological profiles players have.

The Bartle Test of Gamer Psychology in Game Design:

Having a clearer picture of what types of gamers populate certain games and online communities, incorporating that as a factor in game design is crucial in some cases. Depending on what genre of a game someone develops, key aspects appeal to different Bartle types.

Call of Duty probably appeals more to achievers and killers, with a leaderboard and fierce competition being the main focus of gameplay. Call of Duty wouldn’t really hold much appeal for explorers, as there are timed rounds, fast-paced gameplay, and the game world is rather shallow.

If a game is more casual in nature, chances are that socializers and explorers will flock to it.

It seems that role-playing games are the types of games that frequently hold all of the Bartle taxonomy of player types. Achievers earn gold and XP, socializers carouse and talk with friends, explorers scour the game world, and killers raise hell.

The Origin of the Bartle Player Taxonomy:

The Bartle taxonomy of player types was developed in 1996 by Richard Bartle. Bartle, a British writer, professor, and game researcher, brought forth the taxonomy in a paper he authored.

Later on, around the year 2000, the actual test was developed by Erwin Andreasen and Brandon Downey and has people answer a set of 30 random questions. These questions, with binary answers, are framed to determine which of the 4 types of gamers you most relate with.

The original site with the test is no longer available, but some alternatives closely resemble the test enough where test-takers can find out their psychology.

A diagram containing four sections, each with the different categories, shows which of the Bartle types a player is. The different Bartle types are determined through four different mixes of things: Players, Acting, World, and Interacting.

The different groups of player taxonomies are Socializers, Explorers, Achievers, and Killers, abbreviated as SEAK. While anyone who has taken a Psychology 101 course can attest, nothing is definite, and that behaviors lie on a spectrum or gradient. This is true for the Bartle test as well.

Let’s take a closer look at the 4 types of gamers and determine which type you relate to the most. 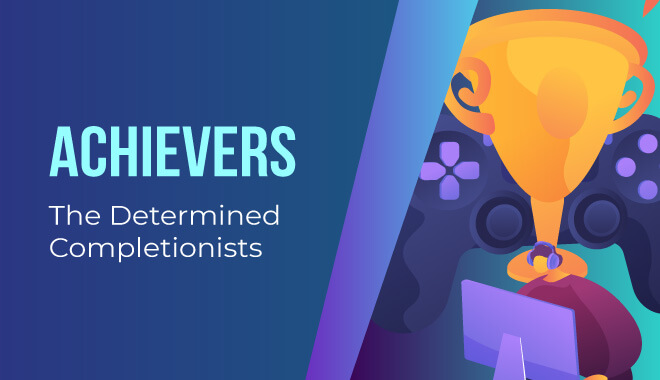 Achievers, also known as ‘Diamonds,’ are players that are entirely dedicated to achieving impressive gaming feats. This manifests itself in different ways:

For achievers, it seems like it is never enough. They are highly motivated to complete in-game activities for potential loot and will dedicate hours of time to bettering themselves and potentially maxing out everything in a game.

If you have ever tried to earn a 100% completion rate in a game, chances are you have the makings of an achiever Bartle type.

For achievers, games are meant to be beaten, nothing else. You will most likely find achievers at the front of the pack, seeking glory and fame.

Single-player Appeal to the Achiever:

Single-player games can be an excellent outlet for achievers. In these titles, achievers will try to complete every quest and level with 100% completion. This can apply to in-game achievements as well.

Some single-player games like Ghost of Tsushima and Final Fantasy VII Remake have unique trophies dedicated to players who earn all of the game’s trophies. A trophy for winning trophies. That’s a strong lure for achiever-type gamers everywhere.

Achievements and trophies range from the simple, unavoidable ones awarded for progressing a story, to others which require the player to complete challenging and specific tasks in-game.

Multiplayer Appeal to the Achiever:

Where trophies and achievements may be a driving force for the achievers in single-player games, multiplayer games are fertile ground for earning rewards.

Whether it’s an MMORPG or a first-person shooter, there are plenty of rewards, titles, points, and in-game currency to warm for the determined player. Trophies also apply to multiplayer games, as things like Gamerscore can be used to flaunt one’s accomplishments.

With multiplier games, it’s easy to see some of the Bartle types overlapping with each other.

Explorers: It’s the Journey, Not the Destination: 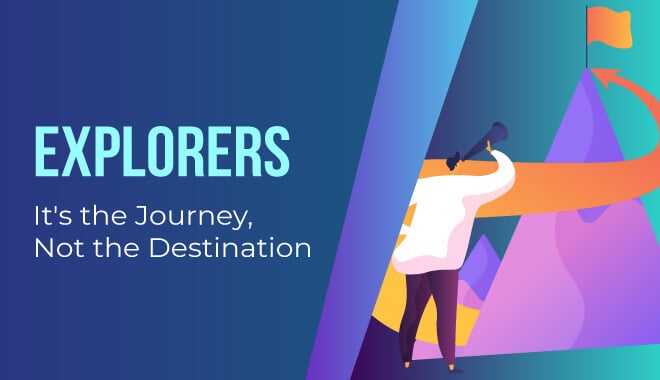 Explorers, also known as ‘Spades,’ are players that delve deep into the game’s world. They enjoy the background, lore, and story of a game.

Time is of no value to these determined and passionate players. These players love to dig around in a game’s world for resources, easter eggs, game secrets, and more.

Explorers are dedicated to familiarizing themselves with a game, knowing everything about mechanics, story, and the environment. These players value freedom and exploration above all else.

Single-player Appeal to the Explorer:

A single-player game is perhaps best suited to this Bartle type of gamer.

In a single-player game, time limits and restrictions are lighter, so an explorer can truly immerse themselves in a game world.

They aren’t into earning lots of experience points and gold, so more open-world games with fewer restrictions are more their type. Explorers tend to gravitate toward games like Myst and other mystery or puzzle games. It’s about the journey, not the destination.

Multiplayer Appeal to the Explorer:

Depending on the genre, explorers may not find much of worth in some multiplayer games. If it’s a game featuring lightning-quick combat rounds and competitive sports play, they likely won’t be interested.

These players want substance to their game experience. They will often tire of particular game types and are quick to drop a game if it starts to seem like work to engage with it.

This goes for MMORPGs, too, if the game isn’t updated frequently enough.

You will most likely find an Explorer scrounging around the far reaches of a game map, sometimes far away from any other gamers.

Socializers: Having a Good Time with Friends: 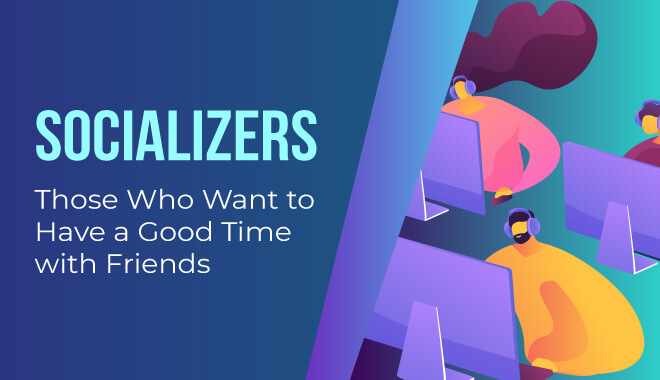 Socializers, known as ‘Hearts,’ are gamers that value socializing in a game. Whether in a party chat online or in an MMORPG, they want to be included in a group or go off on adventures with friends.

Single-player appeal to the Socializer:

Single Player games don’t really allow for much, if any, socializing for the gamer. There are NPCs in many games to interact with, but their potential for socializing is minimal.

Where the Socializer thrives in terms of single-player titles is the community surrounding the game. Games with healthy communities can attract socializers in droves.

Game communities on Steam and Reddit are particular hotspots for these gamer types.

Multiplayer appeal to the Socializer:

This is the comfort zone of the socializers. Multiplayer games offer a fantastic amount of interaction with other players.

The sky’s the limit with online games, especially MMORPGs. With new quests and thousands of new players at every turn, the Socializer truly feels at home among a group of gamers.

You will most likely find a socializer in a tavern with their guild or clan, casually planning out their adventures.

Killers: They Want to Watch the World Burn: 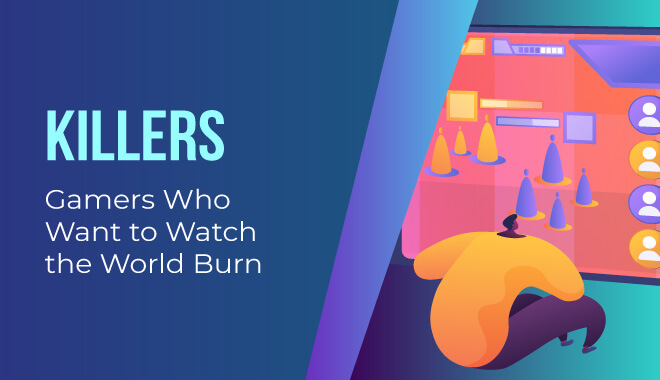 As you’d probably expect, towards the more chaotic end of the Bartle test are the ‘Killers.’ Killers, known as ‘Clubs,’ are the players who join multiplayer games to basically ruin others’ experiences in myriad ways.

These are players who love to wreak havoc in games, killing opponents with skill and reckless abandon. The most severe ‘killer’ types of players like to push boundaries.

They try to change the game’s experience for themselves and other players in a haphazard way. They do this by hacking, cheating, and more.

They could engage in behaviors like spawn camping, friendly fire, exploiting bugs and glitches, and are above all driven by personal desires. They are the ultimate epitome of ‘fiddling while Rome burns.’

Single-player games don’t hold much sway with killers. While they can find certain aspects of games to mess around with, there is only a limited amount of havoc they can cause within the framework of single-player games. Instead, they thrive on the chaotic interaction between players online.

Multiplayer games appeal to the Killer:

While Killers can enjoy exploiting a game’s glitches in a single-player game, they put their chaotic behavior on full display in multiplayer games. Out of the 4 types of gamers, killers are agent provocateurs who just want to watch the game world burn, laugh (and receive the benefit) while it does.

Upsides and Downsides to the Bartle Taxonomy:

It’s fascinating to have a test and taxonomy that determines what category or spectrum a gamer can fit into. This explains a lot of different gamers’ behavior, and it could further help decide which type of gaming environment you want to foster in your own game.

However, there are a few things to keep in mind when examining Bartle’s taxonomy. Richard Bartle was specifically considering players in a MUD or multi-user dungeon. These are often text-based MMORPGs. It’s not the definitive measure when applying it to other game genres.

While it certainly can apply to games like Halo and Assassin’s Creed, Richard Bartle himself doubled down, emphasizing that the Bartle taxonomy should be used with caution regarding games that weren’t MMORPGs.

The real exciting aspect of this is the interaction of the 4 types of gamers. If you can find a game, usually an MMORPG, that brings all of these player types together, you mostly have a living, breathing world filled with unique personalities.

Everyone has a different personal goal, attitude, and personality. This adds extreme depth to the game world but could present problems.

What happens when a killer interrupts the detailed digging of an explorer. What happens when a socializer gets berated by an achiever teammate for not taking the game seriously? These are all things to consider when developing and playing a game.

Why don’t you give the Bartle test spin for yourself? You can see what type of gamer you are and what category you fall in.

Are you the chaotic Killer who only wants to see the game and players bend to your will? Or are you a socializer who enjoys playing and cooperating with others?

Personally, I received a score of 87% Socializer. Out of all of the gamer types, I would like nothing more than to relax in a tavern with my bard friend and talk about the latest gossip and treasure of the game world.

What appeals to you more? Friends or fame? Gold or role-playing? Ultimate power or joining a clan? Take the test and find out!

The Bartle Test of Gamer Psychology